The two men appeared in court just after 4:30pm and had a blank look on their faces as they were led to the courtroom of Magistrate Judy Latchman.

With the afternoon sun going down over Georgetown, 23-year-old Aaron Hing and his friend, 23-year-old Staymon George appeared at the Georgetown Magistrates’ Court and were charged for the murder of British teen, Dominic Bernard.

The two men appeared in court just after 4:30pm and had a blank look on their faces as they were led to the courtroom of Magistrate Judy Latchman.

Wearing a black shirt and blue jeans, Hing led the way into the court with George, who was dressed in black pants and white shirt, a few steps behind.

They were both told that they were not required to enter a plea to the charge of murder with the facts of the case being that on the 14th October, 2015, they murdered Dominic Bernard.

The two men were remanded to prison and will make their next court appearance on Friday morning as the Chief Magistrate would have to assign the case to the Corentyne district.

Both murder accused are being represented by Attorney Nigel Hughes.

Mr. Hughes complained to the court about facts of the investigations  being leaked and made available in the public domain long before the investigation was complete and charges were decided upon. 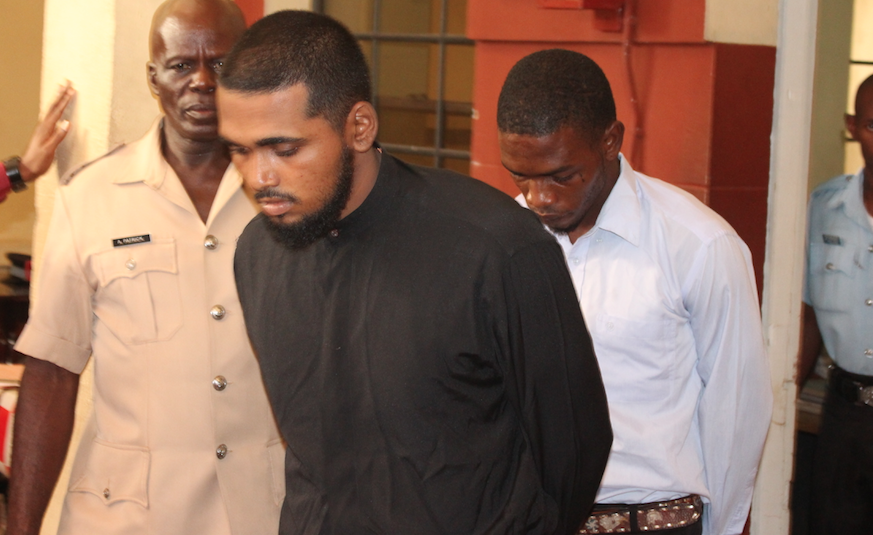 The Attorney said he would like to place his complaint on record. He accused persons involved in the investigations of making specific information regarding the investigation available to the public via the media. Hughes said the investigators should know better and must do better.

He also made it known to the court that he would like all of the scientific evidence of the case with regard to the identification of the dead man, to be made available to the defence so that the defence could have its own independent investigation carried out.

Hughes told the court that he also wants fill disclosure of the statements provided to the police by the defendants and the full report on the investigations by the Police.

The Police prosecutor told the court that certain aspects of the case are still being probed so at this time those reports will not be made available.

The Police also intend to file charges against three other persons in relation to the case. The girlfriend of Hing and her mother are expected to be charged.

18-year-old Dominic Bernard arrived in Guyana on October 14, 2015 for a visit with his God brother, Aaron Hing. He never made contact with his relatives back in England and they eventually launched a search for him after Hing reportedly told them that he never saw the teen.

However, acting on information this past week, the police travelled to the Corentyne village of Kildonan and found the body of the British teen buried in a shallow grave. Hing was arrested hiding out at a Georgetown hotel while the co-accused, Staymon George was arrested at a house in Tucville.

One day after the arrest of the two men, reports surfaced that they had confessed to the crime. The camera and other equipment belonging to the British teen were later found buried a short distance from where his body was found.

The teen was a budding filmmaker.