Residents of Public Road, Kitty woke up this morning to their yards flooded as an unusual high tide sent waves rushing over the seawalls.

A section of the Rupert Craig East Coast Highway was shut down to traffic early Sunday morning as the waves pounded the seawalls and flooded the roadway and nearby streets and yards. The Public Works Ministry has since issued a warning for persons to stay away from the seawalls on Sunday as the over-topping could continue throughout the day and with the late afternoon high tide. 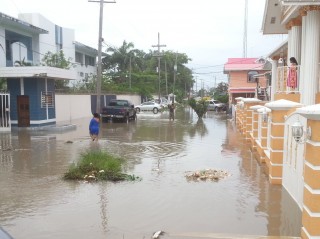 Residents said the sea water began rushing into their yards just before 6 am. Kitty resident, Donna Isles told News Source that she received a call early Sunday morning from a friend who asked her  whether she had “anything under the house”.

The woman said at first she did not understand the question but when she opened her door and looked under the house, the entire yard was flooded. “When we come out of the door, the whole place under water”, she said.

Some Public Road residents said they were not affected in the past when the sea water jumped the seawalls, so they were left surprised by the Sunday morning occurrence and flooding.

The strong waves forced silt onto the roadway along with the flood waters. Pieces of debris could also be spotted strewn along the usually busy East Coast road. 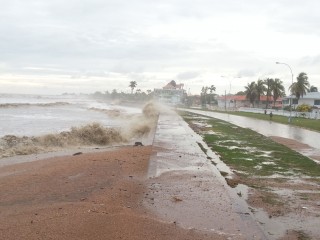 In January, similar high tides flooded several areas close to the sea walls and forced some businesses to close their doors. Guyana’s capital city, Georgetown is below sea level.

The seawalls were built by the Dutch centuries ago to protect the Capital from the Atlantic Ocean.