After the closed door high level meeting, the President said the border controversy with Venezuela was discussed with Prime Minister Modi. After the closed door high level meeting, the President said the border controversy with Venezuela was discussed with Prime Minister Modi.

“We have very strong bilateral relations with the Republic of India and the meeting with Prime Minister Modi served as a renewal and a recommitment, not only to our long standing friendship and our cordial relations, but also to the specific commitments to agreements entered into over the last 10 years,” the President said.

President Granger said that for the first time in the life of the controversy not only are there Venezuelan gun boats in Guyana’s waters, but that Venezuela attempted to appropriate a huge area of Guyana’s sea space, where petroleum exploration is taking place.

He added that while there was no attempt to gain any assurances from India on its position at this time, he will be meeting with Prime Minister Modi again in November in Malta during the Commonwealth Heads of Government meeting.

The President pointed out that over the past week, there has been a gradual build up of armed forces on Guyana’s western frontier, including the deployment of tanks, missiles and an increase in the number of troops near the Cuyuni River. 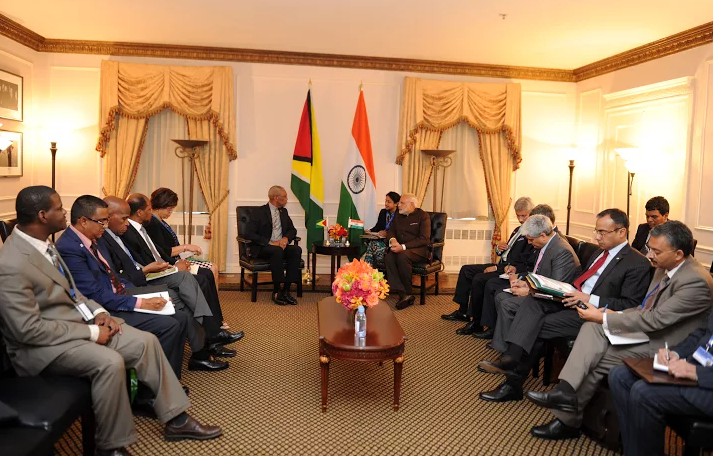 “We have alerted the international community and we look to India, particularly as a strong member of the Commonwealth, to give us support and to lead the debate to ensure the security of small states if guaranteed,” President Granger said.

“For our part, we have decided that after 50 years of harassment and provocation, we need to aim at a juridical settlement and we have indicated to the United Nations that we prefer to go to court. So the actual Good Officers process, after several decades, has not borne fruit. We don’t feel the prolongation of that process will be helpful,” President Granger said.

He reiterated that the Venezuelan claim is not only hampering Guyana’s economic development and exploitation of natural resources, such as petroleum, but it is also becoming aggressive. “It is becoming a serious problem, not only in Guyana on our western frontier and Cuyuni area, but in the Caribbean region,” he added.