Ready to engage all for nation’s benefit -President In his Address to the Nation to mark Guyana’s 47th Independence Anniversary, President Donald Ramotar has urged Guyanese to work harder for Guyana in the interest of the nation and all of its people.

On a cold rainy Saturday night at the National Park in Georgetown, the President delivered his speech at the annual Flag Raising ceremony. He said Guyana has made advancements over the past decades as a very ambitious nation but he admitted that “the last forty-seven years were not always easy, as we pursued these ambitions.  We have had to meander through the torrents, the twists and turns; and ride many ups and downs”. 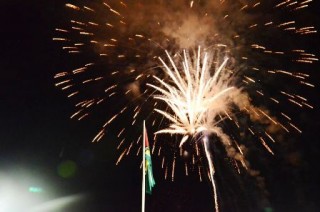 President Ramotar said the struggle was necessary because democracy is an indispensable condition for the task of nation building at every level.

With hundreds of persons in attendance, President Ramotar told the National Flag raising event that as a nation, Guyana has a lot to celebrate. He lauded the development in several sectors and celebrated Guyana’s achievement over the years at the various examinations of the Caribbean Examination Council.

Mr. Ramotar said “I am not pretending that everything is rosy in Guyana. I know there are many problems confronting you”. he noted that while it is true that much has been done to improve the lot of the people, he is aware of many problems that confront citizens in the towns and in the NDCs across our land.

The President also used his speech to highlight the situation in Parliament. The Opposition parties hold the majority in Guyana’s National Assembly. “In any society there will be differences of opinions and differences in approaches to various issues. These differences however should not be used as a roadblock to stymie progress nor is to jeopardize Guyana standing nationally, regionally or internationally”, the President said.

He was making clear reference to the Opposition’s position on the amendments to the Anti Money Laundering Bill. The Alliance for Change has refused to support the amendments until the President begins to sign into law Opposition Bills that were passed by the Parliament and until a Procurement Commission is established.

The other opposition party, A Partnership for National Unity had expressed concern over not being provided with all the relevant information about the amendments in a timely manner. Guyana will miss a deadline to have anti money laundering legislation in place before May 27, 2013.

On the eve of Independence Day, President Ramotar said “I wish to remind you that even when in Opposition the PPP always put Guyana first despite the differences it had with the then government.  That is why we evolved a strategy of Critical Support to demonstrate our determination never to put our country in harm’s way even at the most difficult time in the relationship of our parties”. 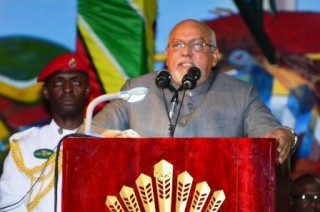 The President did not talk about his move not to assent to Opposition piloted Bills but said “now is the time for us to show more maturity in our body politics, it is a time to put Guyana first; nothing should be done to jeopardize the welfare of our people and country.”

He wrapped up his address by saying he is ready to engage with all stakeholders in pursuit of the goals of the nation.

The Flag raising ceremony was full of colour and creativity as scores of youths danced to national songs across the tarmac of the National Park and the Golden Arrowhead was hoisted against a still night with a colourful display of fireworks in background.