Screams of shock and despair echoed through the Durban Street area on Sunday morning as undertakers removed the charred remains of two young children from the gutted remains of the apartment they once called home.

Scores of onlookers, mostly women, broke down in tears as they saw the two badly burnt bodies, one in a kneeling position; being brought out of the building.

The two children, ages 11 and 8, perished in the early Sunday morning fire that ripped through the house at 71 Durban Street, Lodge between Mandela Avenue and John Street. They have been identified as Adam and Shania Marshall. Their mother and another sibling managed to escape the inferno and are hospitalized with burns to their bodies.

Persons in the area said they noticed smoke emanating from the two storey house just after 4am. The Fire service said it received the first call at 4:30am and firemen were quickly dispatched to the scene.

A young woman who was heading home from a night of partying at the time, said she noticed the fire then saw a woman running out of the house. She said the woman collapsed just in front of her and she hurried to her side to render some assistance. The young lady explained that the woman went in and out of consciousness as neighbours rushed to the scene and persons in nearby houses hurried out of their homes, fearing that the fire could spread.

The Fire Chief explained that by the time the fire men got to the scene of the blaze, the entire house was already engulfed in flames. He said after being told that persons were unaccounted for, the fire service brought out additional tenders and resources. 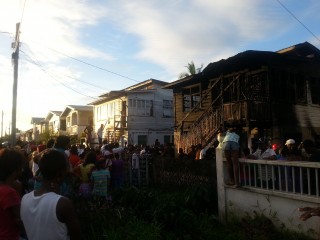 He said after the firemen were able to contain the blaze to the one house, they discovered the charred remains of the two children in a room. He said they appeared trapped. One child was kneeling in a corner, while the other was in a protective position a short distance away in the same room.

He said while the windows to the front of the house were grilled, there was no grill work to the windows to the back of the house. The Fire Chief said that they have been able to establish that the building may have been hooked up to an illegal electricity connection but he is not sure if that started the blaze. Mr. Gentle said additional “light” resources may have been used and the investigation is expected ascertain that possibility.

“The building at the time was not being powered by legitimate electricity but we are still to verify if power was still going to the building because some of the ranks reported that they were receiving mild electrical shocks while fighting the fire”, Gentle said.

Fire Chief Gentle said the fire service was able to contain the blaze to just the one house and save nearby buildings from damages.

The sight of the children sent one woman crying to the ground as she said the children would always go to her house to sleep and eat whenever their mother was not at home. A neighbour said the mother was known for leaving the young children “home alone in the nights” and she may have been returning home when the tragedy struck.

Police investigators and fire detectives were all on the scene probing the tragic circumstances that led to the death of the two children.