“Dropping of rates means nothing to us” -says MAPM official The Movement Against Parking Meters, hosted its third protest against the introduction of the parking meter project outside City Hall today.

A large crowd gathered once again to make known their disapproval with the City Council’s awarding of a contract to the Smart City Solutions company to introduce parking meters in Georgetown. They maintain that the contract is flawed and should be considered illegal.

On Saturday afternoon, a town hall meeting is being hosted at the St. Stanislaus College on the issue. The Mayor and other City Council officials have been invited to take part in the public meeting.

Mr. Ramnauth told News Source that the entire contract must be quashed and the City Council needs to begin the project all over again and do it the right way. He said the reduction of the rates for parking is not enough.

“A dropping of rates means nothing to us, because you don’t negotiate with an illegal contract”, he said.

Ramnauth explained that if the contract is not revoked, the Movement Against Parking Meters is prepared to continue the protest action for the long-haul. 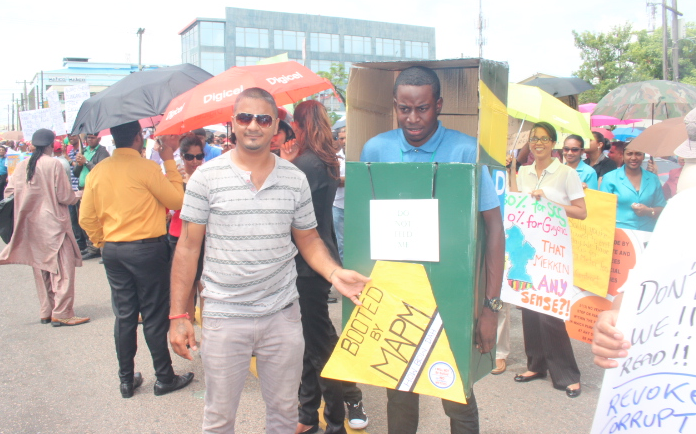 Georgetown Mayor Patricia Chase-Greene and Town Clerk, Royston King, have been trying to defend the contract, pointing to the benefits that the parking meter system could bring to the city. The two are expected to host a joint press conference with the investor, Smart City Solutions, on Friday to address many of the concerns.

Over the past week, the Mayor and Town Clerk have been meeting with various interest groups and stakeholders on the parking meter deal, sharing the contract and other information with them.

This past week in addition to the announcement of a 50% reduction in the rates, the City Council also announced that employees of commercial banks and other specific businesses will be able to park free of cost in front of those businesses and there will be no parking rates attached to parking outside of religious buildings that fall within the parking meter zone.

President David Granger has asked that the City Council examines the concerns of the citizens and come up with a solution that is pleasing to both sides. He has described the initial rates and penalties attached to the parking meter initiative as too “burdensome” .